We have been doing quite a bit of traveling and racing in the last few weeks here in So. Cal. Last week we went to the Inaugural FigSpeed West Coast Classic race in Fontana, California. We were very excited about this event because it was a chance to win $3,000 on both Saturday and Sunday’s races, plus extra prizes and awards. We had the car running strong all day on Friday’s test laps. Running the high power set up that we have, the car was launching with the wheels in the air and consistently 60 footing in the low 1.3 second range. We were very excited for the event to begin on Saturday morning. Unfortunately, looking over some data on Friday night convinced us that we were in danger of hurting the transmission if we went forward with elimination rounds. There was a problem with our torque converter that could have severely damaged our very expensive transmission. We decided it was tough, but safe and smart to pull out of the race, and we became spectators for the remainder of the weekend. It was cool to see the fierce rounds of competition on Saturday and Sunday, but also very hard to watch from the sidelines. Congratulations to all the winners of the event!

We will be taking a bit of a summer break from racing over the next few months. We have some serious upgrades planned for the Magnum, so check back for more details as they’re announced. The goal is to make the Magnum a repeatable, dependable and reliable race car for the remainder of the 2 PSCA points races happening in Las Vegas and Fontana in the fall. We are very much looking forward to having a new and improved Maggie!! 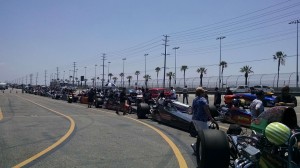 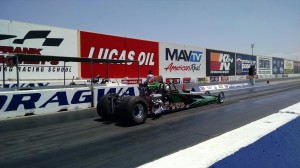