Just wanted to let you all in on a couple of things going on with me and the Magnum. First is that we are very excited to be racing again this weekend. We have been on a bit of a good roll this year so far, and I am really hoping to continue that roll. We’re going to be racing in the SCEDA series this weekend. This will be our first time racing in this particular series, so it will be interesting to see how it compares to our other series’ that we race in. It will be a two day race, and two chances to win so we keep your fingers crossed and come on out to Fontana to see!

Just before this race, and in preparation for the rest of the season, we have also brought the car to Hedman Hedders in Whittier CA for some badly needed exhaust upgrades. When we got the Magnum back from Arrington Performance this winter, there were no available Hedders that would fit both on the heads and in the tight packaging of the car. So the engine was tuned on the engine dyno with 2″ headers, but we left the facility with 1.75″. Ideally we would have 2″ headers for running down the track. We are expecting to gain some low end torque as well as some top end horsepower after running with our new 2″ headers from Hedman! These new headers were completely custom made, and I have to thank everyone at Hedman for their incredibly hard work in getting these headers done so fast! Just in time actually, to head to Magnuson Superchargers in Ventura, CA for some additional tuning. Larger diameter headers might change some of the aspects of the air fuel ratio in the tune, and we want to be as safe as possible with this brand new engine! So with the help of both Simon from Magnuson and Matt from Arrington, we will be heading into this weekend with a new tune as well!

It’s always a bit difficult going into a race with such a big gap since the last one, but I am looking forward to getting back in the car again. Thanks to all those that helped with this big project. Hopefully we’re done doing things to the car for a little bit, as we are racing 3 races in 4 weeks! See you there! 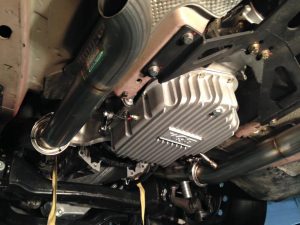