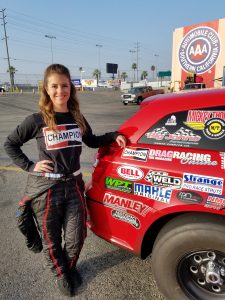 Hey everyone and happy fall! I am sad to say that the 2016 racing season has come to a close. We had quite the running for a good points standings for most of the year in the NMCA West series this year but at the last race, we had some bad luck that turned into round losses. We came into the last race in 6th place in the Quick Street class, and were hopeful for some win lights on race day. But in the first round of eliminations on Sunday we had severe tire hop and shake after launch, causing the tires to loose traction and me to lose the round. Since there are no buy backs in this class we were out of competition for the year in Quick Street. We ended up going a few rounds in the Bracket 2 class, but we were still done early on race day.

The good news is that our mechanical problems with our belt are solved thanks to the folks at American Racing Solutions. We worked with Frank Cressibene out of New Jersey to alleviate our belt cutting issues, and he was an incredible help to us. He introduced us to their racing high performance belt tensioner. Not only do they make these for a variety of makes and models, including late model hemis, but they make them absolutely bullet proof. I don’t know if we would have been able to get down the track this season without them. If you have a high horsepower car or a supercharged engine, I highly recommend giving them a call. Visit their website at http://americanracingsolutions.com/ for more info!!

The 2017 racing season is the first season that we are not starting out the year having had changed something major on the race car. I learned a lot about the Magnum’s problems this year and about drag racing in general, and I can’t wait to put those lessons to work next year. Thanks to everyone who has supported us throughout this season, I would not be racing if it weren’t for your help. See you in 2017!