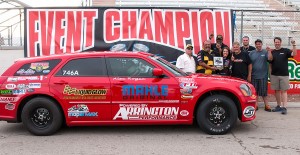 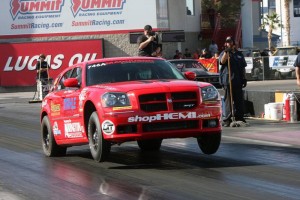 As I have been saying in the last few blogs, we got a new engine and transmission all put together for the beginning of this season. We had a brand new 426 HEMI with a TH400 transmission and it made about 900hp on the engine dyno at Arrington. It made just over 700hp to the tires on the chassis dyno, but we are running it with smaller than optimal headers. So once those are exchanged for proper ones, we’re confident we’ll pick up some more horsepower and run even faster, but last weekend, the car ran consistently in the 10.00-10.16 range all weekend at 134 mph.

We decided to race in three classes at the Muscle Cars at The Strip event in Las Vegas to give us the most amount of practice before competition started on Sunday. We had a few hiccups in getting the car set up before the race. In fact, we were even working on the car in the parking lot of the race track to make sure we were completely ready to go once the gates opened. One of problems was that the automatic air shifter would not work properly. We tried a couple different things and realized that there was nothing we could do in the short amount of time that we had. So I had to learn how to shift the car in a very short amount of time. Shamefully I admit that I had never shifted a car before, so it was quite a learning experience. It all worked out great though because thanks to our Diablosport Trinity data logging the runs for us, we knew that my shifts were within 150 rpm consistently from the previous run.

On Sunday we started the morning off great with 3 round wins in a row, one in each of the classes we were competing in. By the afternoon we were still running strong in the New HEMI Challenge, lost in the 2nd round of the Mopars Vs The world and lost in the 4th round in the Pro class. But we were able to keep it going in the Late model class and ended up winning the race. One of the most amazing things about this win was that we got to do it in front of the Arrington crew that was at the race with us. Thanks to Tim, Alex and Chris for making the long trek from Virginia to Las Vegas to see the newly improved Arrington build Maggie on track for the first time. They were good luck!  And since we landed in the runner up spot in the same class last year, it was awesome to finally seal the deal and celebrate with them.

We have our second race of the season coming up in less than two weeks starting on April 1st. There are a few things yet to be worked out on the car, but we’ll get it all done. See you in Fontana for the NMCA race on April 1st! 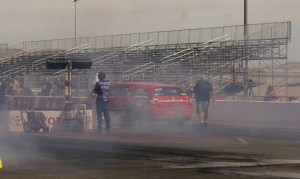 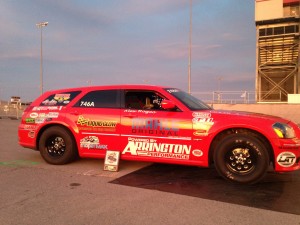