We finally had our first points race of the year. Since the PSCA series is no longer holding races in southern California, we decided to give the NMCA West series a shot this year. We are very happy with the first race of the year. We had the opportunity to compete in both the Bracket 2 and Quick Street classes with some of the best and most competitive racers in so Cal! The Quick Street class, which is very similar to a Summit Series Pro class had just under 40 entries for the weekend. We knew going into this series that the racers are all very tough. The level of competition is higher here than in some other series that we’ve raced in. Overall, it was a very successful weekend for the Magnum and our team. Having competed and won at the last race in Vegas, the fastest we got the car was in the 10 flat range, so this weekend at lower physical altitude we were really crossing our fingers for a 9 second time slip. And to our delight, during Friday’s test runs we were able to get the car well into the 9 second range, running a best ET of 9.85 at 136 mph. We stayed in the high 9s for the rest of the weekend. It was great to finally show off a 9 second time slip, especially to the Arrington crew, who worked so hard to get this car consistent and fast. At the end of Saturday’s qualifying sessions, we decided to go for a stellar reaction time in an effort to grab that #1 position. All the stars aligned because I was able to cut a .000 reaction time on the tree, giving me 10 extra bonus points and the potential bye in the first round of Sunday’s eliminations. It was great to go for that light and actually get it.

Sunday’s eliminations lasted well into the afternoon. Having a bye in the first round allowed us to see what the car would run first thing in the morning without having to worry about breaking out. In the second round we faced veteran racer, Mike “the Machine” Nordhal, in his gorgeous candy apple red Nova. Having both broke out and had similar lights on the tree, it was close at the top end, but he ended up breaking out more and the win light came on my side. In the 4th round I faced eventual event champion, Jeff Interliccia, and I knew that I had to be on my game to beat him. He is one of those racers that is always good on the tree and his car will run the dial in number the majority of the time. Unfortunately, I pushed the tree an little too much and went red by -.018 ending the race before it even started. Good news is that the car ran within a 9 thousandths window for 5 passes in a row. We ended the weekend sitting 4th in points in the Quick Street class, and are very much looking forward to the rest of the races in this series. Next weekend we will be showing and demonstrating at the Red List Series event. Check my Alex Blog post for more info on that race. Since it’s not a bracket race, we will be making test runs and promoting our awesome sponsors, like Magnuson Superchargers, Arrington Performance, Diablosport and Westminster Performance Transmission. 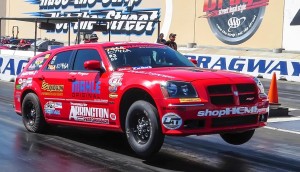 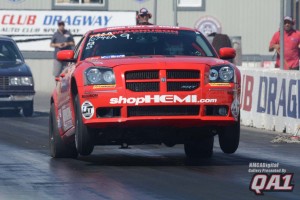